Guess the Word is a simple game where the user has to guess the word, 1 letter at a time. This was made using a python module named PyGame. I have used Python 2.7 to make the 32-bit GUI version of the game and Python 3.4 to make the other GUI versions.

The game contains many words which are randomly selected at the beginning of each round. The user gets only 10 chances to guess the word. When ever the user enters a letter that is not in the word, it gets removed from the keyboard on the screen and the number of chances left decreases. However if the user makes a right guess i.e., the user enters a letter that is in the word then the number of chances left does not decrease and all the occurrences of that particular letters gets revealed on the display.

The player wins when he successfully guess the word, and the score is calculated as 5 times the number of letters in that word that was supposed to be guessed.

This game is very good for kids and it suits all other users too, as it sharpens the mind of the user by forcing the user to think of the right word that fits the space. I saw a few kids playing this game on a toy computer, I liked the game and thought of building it on my own, and here you have it, it is now available for PC as a PyGame.

Download the game and try it out, you can leave suggestions for future versions in the comments section.

NOTE: If the game says that you are missing msvcr100.dll, then please install visual C++ 2010 redist package. 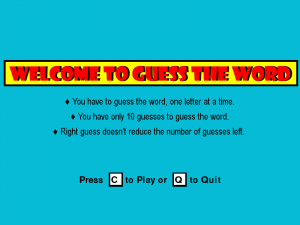 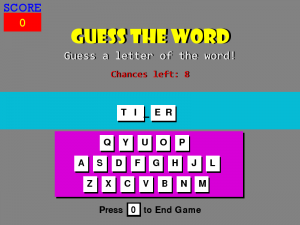 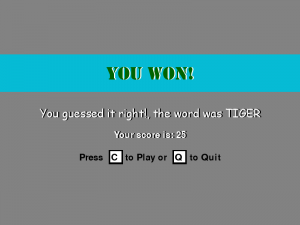 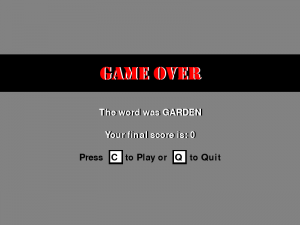